Your name is Susan. You are 14 years old and you have ambitions of becoming a witch. You have just completed two years of study at the Spooksville Academy of Witchcraft. You reckon you know all the theory and now it's time to put that theory into practice.

As with all trades, you must start out as an apprentice. You've been allocated to Broomhilda, the old witch that lives in the spooky house on the outskirts of town. The other girls say that she's really mean, but she sure knows her hexes and potions.

It's Halloween and you've just arrived at the front gate to Broomhilda's house. You only have a few necessities with you. The first thing you'll have to do is find Broomhilda. After that, who knows?

Your goal is to find Broomhilda, the witch, and follow the instructions she gives you. I can't tell you any more than that. All will become clear in due course.

This is a traditional text adventure that was originally written for the Adventuron Halloween Jam, 4 October to 2 November 2019. See the jam page for the jam rules.

A text adventure is a form of computer game that presents you with a story. You take on the role of the main character in the story and control that character's actions. The story has a goal and you will need to solve puzzles in order to achieve that goal. The computer tells you where you are, what you can see and what's happening around you. You can then move around, examine the things you find and manipulate objects by telling the computer what to do using simple English commands.

To move around, use commands like GO NORTH and GO SOUTH. You can move in any of the four cardinal compass directions, as well as UP and DOWN. To save typing, movement commands can be abbreviated to N, S, E, W, U and D. You can sometimes use other commands such as CLIMB, ENTER, JUMP or SWIM to move to another location. These will be reasonably obvious when the time comes.

You can also try your other senses when it seems appropriate, e.g. SMELL CHEESE, FEEL CAT or LISTEN. Unlike EXAMINE, these actions aren't necessary to solve any puzzles, so don't feel obligated to use them.

To see what you are currently carrying and wearing, use INVENTORY (or I). As you are only a young girl, you can only carry five items and wear two items at a time.

There are many other verbs that can be used to manipulate objects. These will be fairly obvious when the time comes. Common verbs include OPEN, CLOSE, EAT, DRINK, READ, RING and so on.

Part of the challenge is working out what verbs to use in any given situation. Don't be scared to try anything. The game has well over 100 verbs, so if something doesn't work, try a synonym or try a different way of achieving the same thing. For example, if FEED BIRD doesn't work, try GIVE SEED.

You will encounter a few characters in the game, not necessarily human. In addition to examining them, try verbs like TALK, GIVE and SHOW. Animals will require a little more imagination.

You can use IT or THEM to refer to the noun used in the previous command, e.g. EXAMINE BOOK, GET IT, EXAMINE HERBS, GET THEM.

You can use ALL or EVERYTHING to refer to all the appropriate objects with GET, DROP, PUT, WEAR and REMOVE, e.g. GET ALL to get everything in the current location or DROP EVERYTHING to drop everything you're holding.

Use TURNS to see how many turns you've taken. Once you've solved the game, you should try to solve it in as few moves as possible. The number of turns taken does not include 'meta' commands such as SCORE, TURNS and LOOK.

This game was prototyped in Inform 6, then ported to Adventuron. Adventuron was written by Chris Ainsley. 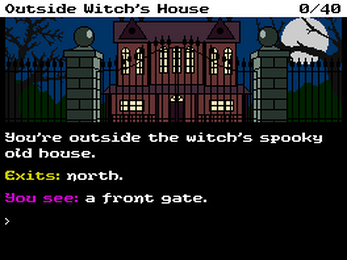 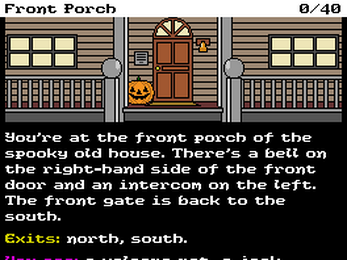 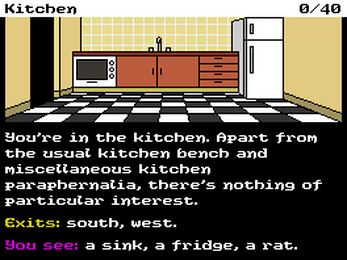