You are Rowan of Bunglewood Downs, would-be thief and seeker of magic.

There's known to be a Cave of Magic deep in the forest of Bunglewood. The cave is not hard to find, but no one goes there for fear of being eaten by a troll. As no one's been there, no one knows for sure what's in the cave. It's rumoured to contain treasure, but if it contains treasure, why isn't it called The Cave of Treasure?

No, you suspect that the cave contains magic. There's only one way to find out for sure and that's to go there!

Your goal is to find The Cave of Magic, uncover its secrets and steal any magic that you find there. You are awarded 5 points for completing significant tasks. This gives an indication of your progress. The maximum score is 20 points. Each time you are awarded points, a short jingle plays, so make sure you have sound turned on.

This is a traditional text adventure that was originally written for the Adventuron CaveJam, 31 August to 23 September 2019. See the jam page for the jam rules.

A text adventure is a form of computer game that presents you with a story. You take on the role of the main character in the story and control that character's actions. The story has a goal and you will need to solve puzzles in order to achieve that goal. The computer tells you where you are, what you can see and what's happening around you. You can then move around, examine the things you find and manipulate objects by telling the computer what to do using simple English commands.

To move around, use commands like GO NORTH and GO SOUTH. You can move in any of the four cardinal compass directions, as well as UP and DOWN. To save typing, movement commands can be abbreviated to N, S, E, W, U and D. You can sometimes use other commands such as CLIMB, ENTER, JUMP or SWIM to move to another location. These will be reasonably obvious when the time comes.

You can also try your other senses when it seems appropriate, e.g. SMELL TROLL, TOUCH WATER or LISTEN. Unlike EXAMINE, these actions aren't necessary to solve any puzzles, so don't feel obligated to use them.

To see what you are currently carrying and wearing, use INVENTORY (or I). As you are not a pack horse, you can only carry five items and wear two items at a time.

There are many other verbs that can be used to manipulate objects. These will be fairly obvious when the time comes. Common verbs include OPEN, CLOSE, EAT, DRINK, READ, DIG and so on.

Part of the challenge is working out what verbs to use in any given situation. Don't be scared to try anything. The game has well over 100 verbs, so if something doesn't work, try a synonym or try a different way of achieving the same thing. For example, if FEED BIRD doesn't work, try GIVE SEED.

You will encounter at least one character in the game. In addition to examining him, try verbs like TALK, GIVE and SHOW.

You can use IT or THEM to refer to the noun used in the previous command, e.g. EXAMINE BRANCH, GET IT, EXAMINE APPLES, GET THEM.

You can use ALL or EVERYTHING to refer to all the appropriate objects with GET, DROP, PUT, WEAR and REMOVE, e.g. GET ALL to get everything in the current location, and DROP EVERYTHING to drop everything you're holding.

Use TURNS to see how many turns you've taken. Once you've solved the game, you should try to solve it in as few moves as possible. The number of turns taken does not include 'meta' commands such as SCORE, TURNS and LOOK.

This game was prototyped in Inform 6, then ported to Adventuron. Adventuron was written by Chris Ainsley.

I cannot believe I don't even know how to make a fire with a dry branch, rock, and knife/steel.  I would never survive in the wilderness.  Hint?

I absolutely love your games, sir.

You've got the right idea, but you're missing one vital item. If you examined the troll, you would have noticed that he's wearing a pouch, but he won't let you take it. He's bigger and stronger than you, so you can't fight him. Once you get past the troll, he'll have his back to you. You can then take advantage of the situation and throw something heavy at him to knock him out.

How did I not think that?!  I originally did the deed before (in front of him), but he told me to stop playing around or something...  I just didn't think of doing it behind his back.

Man, I really hope this is a long game, as in it'll take days, even weeks to finish (think back to Masquerade, Sherwood Forest, Scott Adams etc.).  Anyway this game really brings me back when graphic adv games were IT, and I am loving every second of this!  Thanks so much!

Sorry to disappoint you, but it's only a small game. This was my first Adventuron game and I only had two weeks to write it (although that was later extended to three weeks).

If you like a bigger game with graphics, you might enjoy 'The Witch's Apprentice' and 'Santa's Trainee Elf'. They both have some nice puzzles ranging from easy to medium, or maybe hard, depending on your experience.

For a longer game with a Scott Adams' feel, I really like 'Igor's Quest'. This was restricted to two-word input, two-word responses (which made it really hard to write) and no graphics, but it has some great puzzles oriented around word play.

I really wanted to play this game but I'm totally stumped on the very first puzzle (how to get past the troll). Are there in-game hints? If so how can I trigger them?

Did you talk to the troll? I seem to recall him saying that he was hungry. Try giving him something to eat. If he rejects it, make use of something that was in your inventory at the start.

I started on an update, but was diverted onto other projects. The new version will have an in-game hint system and you no longer throw like a girl.

Examine the camp fire, then dig or search what you find there.

Perfect!!! And, thank you for getting me into text adventures!

For the love of all that is holy can someone please tell me how to get past the room with the camp fire.  Thank youuuuuuuuuuuuuuu (love the game by the way, just more stuck than sticky the stick insect on a sticky bun) 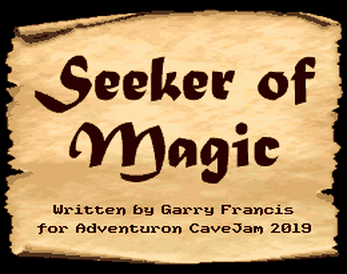 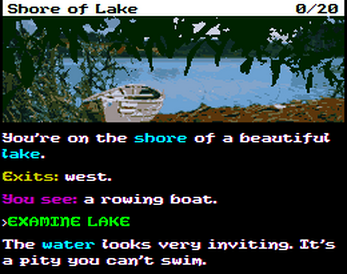 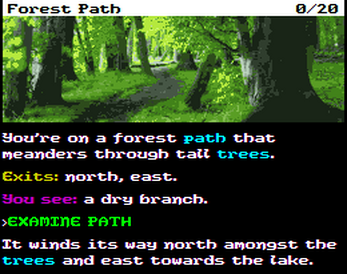 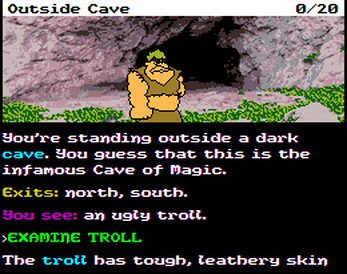