The weather is getting hotter and bushfire season is approaching. The animals have to stock up on food and prepare their bushfire survival plans.

Every year, the animals appoint a bushfire warden. The bushfire warden has an important job to do, for he or she has to check on all the other animals and make sure that they have their bushfire survival plans in place.

This year, it's Kenny Koala's turn to be the bushfire warden. He has a checklist of things to do. Can you help Kenny to complete all the things on his checklist?

This is a fun little adventure set in the Australian bush in the south-eastern part of Australia. It should appeal to both children and adults, and will also teach you about some of Australia's unique flora and fauna. It has an optional tutorial mode and an extensive in-built hint system, so it is an ideal game for beginners to text adventures.

This is a traditional text adventure that was written for Text Adventure Literacy Jam 2022, 21 March to 2 May 2022. See the jam page for the jam rules.

In some cases, the verb phrase and the first noun phrase may be followed by a second noun phrase. The two noun phrases are usually separated by a preposition. For example, DIG HOLE will attempt to dig a hole with your paws (as you didn't specify a second noun phrase), but DIG HOLE WITH STICK will attempt to dig a hole with the stick. If you only use a verb and a noun, the game will generally tell you if it needs an extra phrase or implicitly try to deduce what is needed for the second phrase.

To move around, use commands like GO NORTH or NORTH. You can move in any of the four cardinal compass directions, as well as UP and DOWN. To save typing, movement commands can be abbreviated to N, S, E, W, U and D. You can sometimes use other movement commands such as CLIMB, ENTER, EXIT, IN or OUT. These will be reasonably obvious when the time comes.

To see what you're currently carrying and wearing, use INVENTORY (or I). As you are a koala, not a pack horse, you can only carry five items and wear two items at a time, but you may be able to put things in containers if you need to increase your load. If your inventory is full, just drop something that you no longer need. Inventory management is part of the game.

There are many other verbs that can be used to manipulate objects. These will be fairly obvious when the time comes. Common verbs include READ, OPEN, CLOSE, LOCK, UNLOCK, TURN ON, TURN OFF and so on. Use PUT, PLACE or INSERT to put objects into containers or on supporters, e.g. PUT LEAVES IN CUPBOARD or PLACE JAR ON SHELVES. Hints to which verb to use are quite often included in the responses to other commands, so read responses carefully.

You will encounter quite a few animals in the game. When you first meet new animals, in addition to examining them, you should try talking to them, e.g. TALK TO KELLY. The response will change as the game progresses, so try talking to them again after things have changed.

Make sure you read the note that you're carrying at the start of the game. This lists the tasks you need to complete. You are awarded 20 points for completing each task. The maximum score is 100.

The score and the number of moves is shown in the status bar at the top of the screen. You can also use SCORE to see how you're going and READ NOTE to see which tasks you've completed.

You can use IT or THEM to refer to the noun used in the previous command, e.g. EXAMINE NOTE, READ IT, EXAMINE LEAVES, PUT THEM IN CUPBOARD.

You can refer to multiple objects by separating the objects with AND, e.g. GET ROCK AND NOTE. Using IT and THEM in the next command will only refer to the last of those objects, e.g. EXAMINE IT will refer to the note.

When using ALL, you can use EXCEPT or BUT to exclude some objects, e.g. DROP ALL EXCEPT ROCK.

Finally, you can enter multiple commands on the same line by separating them with a period, e.g. OPEN DOOR. ENTER IT.

Use VERSION to get the game version. Use ABOUT or INFO to get background information and credits for the game. Use CREDITS to get the credits only.

Use UNDO to undo the last move. This is handy if you change your mind, make a mistake or just want to experiment with something.

Use HELP to get a brief reminder of how to play the game or HINT to get a context-sensitive hint related to the current location.

Use RESTART to restart the game from the beginning. Use QUIT (or Q) to quit without restarting.

Most importantly, have fun, enjoy the game and help Kenny and his friends to prepare for the bushfire season.

There are two ways to play the game.

Windows: I recommend Windows Frotz from the infocom/interpreters link above. (There are others, as well.)

An adorable and highly educational text adventure, with interesting characters and a fascinating landscape of Australian plants! The puzzles are unique and fun to solve. I'd say their difficulty ranges from very easy to easy. 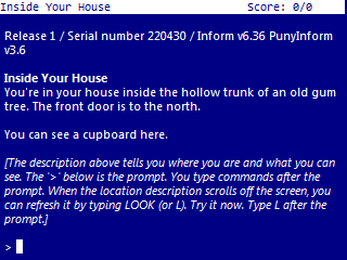 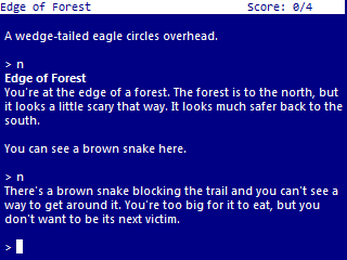 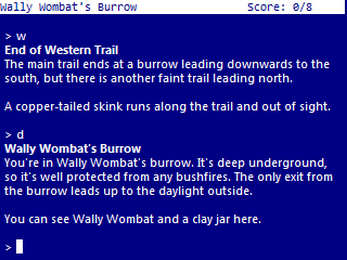