You're Danny Dipstick, the sociable single. The only trouble is that all the girls hate you because you're a dork. Every Saturday night you go to the local nightclub and every time you strike out and end up going home alone.

Tonight is going to be different. After picking up some advice from your neighbour, you vow that tonight is the night that you will meet a nice girl and get her phone number. After that, who knows?

As you stand outside the front lobby of the nightclub, you can't help thinking that you've forgotten something...

Your goal is simply to get a girl's phone number so that you can take her out on a date. In order to do so, you will have to follow the advice given to you by your neighbour, and that means addressing three issues.

This is a traditional text adventure that was written for ParserComp 2021.

In some cases, the verb phrase and first noun phrase may be followed by a second noun phrase. The two noun phrases are usually separated by a preposition. For example, UNLOCK DOOR WITH HOUSE KEY. If you only use a verb and a noun, the game will generally tell you if it needs an extra phrase or implicitly try to deduce what is needed for the second phrase.

This is only a small game, but you should still draw a map to ensure that you don't miss any exits to other locations.

Make sure you EXAMINE everything you find, as subtle hints and clues are scattered everywhere. It might even reveal a new object. When you enter a new location, scan the location description for nouns and examine each of those nouns. If the responses reveal any new nouns, then examine those as well. To save typing, EXAMINE can be abbreviated to X. For example, EXAMINE NIGHTCLUB can be abbreviated to X NIGHTCLUB.

You can also try your other senses when it seems appropriate, e.g. SMELL, TOUCH and LISTEN. Unlike EXAMINE, these actions probably aren't necessary to solve any puzzles, so don't feel obligated to use them.

Apart from exploring and examining things, most of your time will be spent manipulating objects. Use commands like GET or TAKE to pick up an object, e.g. GET DRINK. Use commands like DROP or DISCARD to drop an object, e.g. DROP MONEY. Use WEAR to wear something, e.g. WEAR RING. Use REMOVE to remove something that is already worn, e.g. REMOVE SUIT.

There are many other verbs that can be used to manipulate objects. These will be fairly obvious when the time comes. Common verbs include EAT, DRINK, BUY and so on. Use verbs like PUT to put objects into containers or on supporters, e.g. PUT CIGARETTE BUTT IN ASHTRAY.

To see what you're currently carrying and wearing, use INVENTORY (or I). As you are not a pack horse, you can only carry ten objects at a time, not counting the things you are wearing. As this is only a small game, this limit is not likely to cause a problem.

You will encounter quite a few characters in the game. When you first meet new characters, in addition to examining them, you should try talking to them, e.g. TALK TO BARTENDER. You can also try asking them about something that seems relevant to get further information, e.g. ASK ROSE VENDOR ABOUT NIGHTCLUB. You can also try showing them something or giving them something, e.g. GIVE MONEY TO CLERK.

You can use the pronouns IT, HIM, HER or THEM to refer to objects used in previous commands, e.g. EXAMINE NOTE, READ IT.

You can refer to multiple objects by separating the objects with AND, e.g. GET GIN AND TONIC.

When using ALL, you can use EXCEPT or BUT to exclude some objects, e.g. DROP ALL EXCEPT MONEY AND NOTE.

You achieve one point for addressing each of the issues that your neighbour told you about, and a further point for getting a girl's phone number. Your score and the number of moves is shown in the status bar at the top of the screen.

Use SCORE to get your current score. Use STATUS to see how you're going with each of the issues that your neighbour told you about.

Use VERSION to get the game version. Use ABOUT or INFO to get some background information and credits for the game. Use CREDITS to get the credits only.

Use UNDO to undo the last move. This is handy if you change your mind or make a mistake. (You can't get killed or get into an unwinnable situation.)

For an extra challenge

This game is all about exploration, finding things, solving puzzles and having a bit of a laugh along the way. For an extra challenge, once you have completed the game, try solving it in the minimum number of moves.

Most importantly, have fun, enjoy the game and don't pinch any bottoms in the bar.

Windows: I recommend Windows Frotz from the interpreters link above. (There are others, as well.)

Type ABOUT in game for further background info. 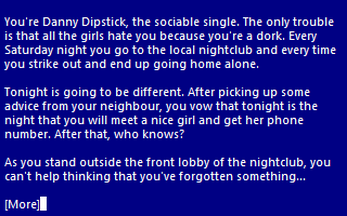 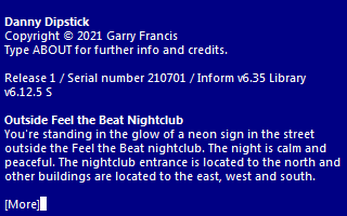 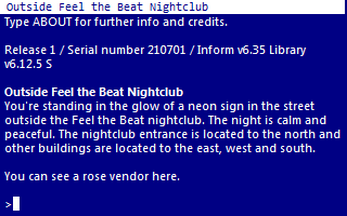