You wake up feeling groggy. Your head hurts.

You run your fingers through your hair and feel a nasty bump on the back of your head. The last thing you remember was sweeping the floor in the pub before the early morning patrons started arriving. You look around.

"What the hell am I doing in the broom closet?"

Your first goal is to find out what you're doing in the broom closet and why you've got that bump on the back of your head. You notice a note pinned to the wall with a knife. Maybe that will give you some clues.

Once you get out of the closet, talk to the characters you meet and ask them about the things mentioned in the note and anything significant that they mention. Pretty soon, your goal will become clear.

This is a traditional text adventure that was written for PunyJam #1, 9 April to 3 May 2021. See the jam page for the jam rules.

In some cases, the verb phrase and first noun phrase may be followed by a second noun phrase. The two noun phrases are usually separated by a preposition. For example, DIG GRAVE will attempt to dig a grave with your hands (as you didn't specify a second noun phrase), but DIG GRAVE WITH SHOVEL will attempt to dig a grave with the shovel. If you only use a verb and a noun, the game will generally tell you if it needs an extra phrase or implicitly try to deduce what is needed for the second phrase.

To move around, use commands like GO NORTH and GO SOUTH. You can move in any of the eight major compass directions, as well as UP and DOWN. To save typing, movement commands can be abbreviated to N, S, E, W, NE, SE, NW, SW, U and D. When you're on board a ship, you can optionally use the ship directions FORE, AFT, PORT and STARBOARD (F, A, P and SB). You can sometimes use other movement commands such as CLIMB, ENTER, EXIT, GET ON, GET OFF or ROW. These will be reasonably obvious when the time comes.

To see what you're currently carrying and wearing, use INVENTORY (or I). As you are not a pack horse, you can only carry ten items and wear two items at a time, but you may be able to put things in containers if you need to increase your load.

There are many other verbs that can be used to manipulate objects. These will be fairly obvious when the time comes. Common verbs include OPEN, CLOSE, LOCK, UNLOCK, LIGHT, EXTINGUISH, EAT, DRINK, PUSH, PULL and so on. Use PUT, PLACE or INSERT to put objects into containers or on supporters, e.g. PUT PEBBLES IN BAG or PLACE BAG ON TABLE.

You will encounter quite a few characters in the game. When you first meet new characters, in addition to examining them, you should try talking to them, e.g. TALK TO HAROLD. To get further information from them, try asking them about the other characters or something that they've mentioned, e.g. ASK HAROLD ABOUT TREASURE or just ASK ABOUT TREASURE. You can also try showing them something or giving them something, e.g. GIVE NOTE TO HAROLD.

You can use IT or THEM to refer to the noun used in the previous command, e.g. EXAMINE NOTE, READ IT, EXAMINE PEBBLES, PUT THEM IN BAG.

You can refer to multiple objects by separating the objects with AND, e.g. GET KNIFE AND NOTE. Using IT and THEM in the next command will only refer to the last of those objects, e.g. EXAMINE IT will refer to the note.

There is no score in this game. The number of moves is shown in the status bar at the top of the screen.

Use VERSION to get the game version. Use ABOUT, CREDITS or INFO to get some extra background information and credits for the game.

Use UNDO to undo the last move. This is handy if you change your mind, make a mistake, get killed or get into an unwinnable situation. UNDO is not available with the disk images for 8-bit andcomputers.

Most importantly, have fun, enjoy the game and try to avoid the pirates.

There are three ways to play the game:

Windows: I recommend Windows Frotz from the infocom/interpreters/frotz link at the Interactive Fiction Archive. (There are others, as well.)

Pirata One font by Rodrigo Fuenzalida and Nicolas Massi.

Congratulations on winning first place in the Puny Jam! This game may be your best yet, despite having no graphics! The story, characters, and locations were so believable, that I can almost believe it DID have graphics - I can see everything so clearly in my mind. Your puzzles were incredibly fun to solve, and ranged from easy to very difficult, so there was constant reward and challenge.  I'm honored to have served as one of your playtesters and am looking forward to playtesting for you again :)

Thank you. The game is only as good as it is thanks to my wonderful play testers. Even though the jam was only three weeks, I did a lot of research to get things feeling authentic. I'm glad you noticed. There are lots of extra details (and some Easter eggs) for anyone that's prepared to do a little exploration.

I hope you release this on the C64 with a few graphical screens!

Now that the jam is over, I plan to do a couple of small bug fixes/improvements based on comments received. I will certainly do some 8-bit and 16-bit versions. I am just waiting for the relevant tools to be released in a month or so. There will also be a browser-playable version. I have done quick and dirty Atari 8-bit and C64 versions, but they have not been tested. Please keep in mind that the 8-bit versions are dependent on the interpreters available for those platforms, hence there is no support for UNDO and no z-code games support graphics. Sorry about that. 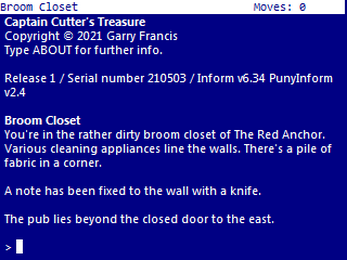 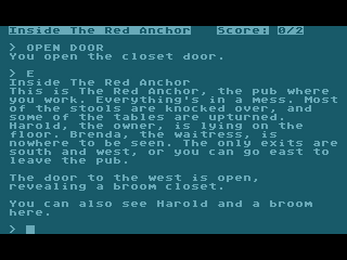 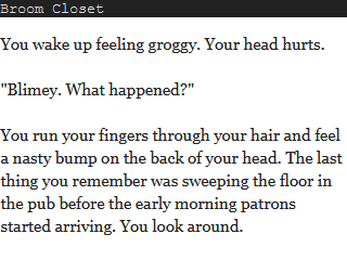 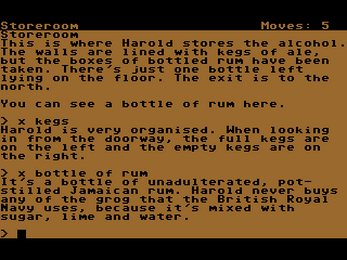