Of all the forms of alchemy practised throughout the ages, the best known is the quest to turn base metals into gold. Of course, everyone knows this is impossible. Even so, there's a rumour that an alchemist in the forest has figured out how to do the impossible and has been building up quite a stash of the shiny yellow metal.

After picking up a lead in the local tavern, you think you've worked out the location of the alchemist's house. It's time to pay the alchemist a visit and make a little, er, withdrawal.

After trudging through the forest for a day, you stop to get your bearings and have a rest. You feel like you're getting close.

This is a traditional text adventure that was written for ParserComp 2022, 30 April to 30 June 2022. See the jam page for the competition rules.

In some cases, the verb phrase and first noun phrase may be followed by a second noun phrase. The two noun phrases are usually separated by a preposition. For example, DIG GRAVE will attempt to dig a grave with your hands (as you didn't specify a second noun phrase), but DIG GRAVE WITH SHOVEL will attempt to dig a grave with the shovel. If you only use a verb and a noun, the game will generally tell you if it needs an extra phrase or implicitly try to deduce what is needed for the second phrase.

To move around, use commands like GO NORTH and GO SOUTH. You can move in any of the four cardinal compass directions, as well as UP and DOWN. To save typing, movement commands can be abbreviated to N, S, E, W, U and D. You can sometimes use other movement commands such as CLIMB, ENTER, EXIT, GET ON or GET OFF. These will be reasonably obvious when the time comes.

To see what you're currently carrying and wearing, use INVENTORY (or I). As you are not a pack horse, you can only carry ten items and wear two items at a time, but you may be able to put things in containers if you need to increase your load.

There are many other verbs that can be used to manipulate objects. These will be fairly obvious when the time comes. Common verbs include OPEN, CLOSE, LOCK, UNLOCK, LIGHT, EXTINGUISH, EAT, DRINK, PUSH, PULL and so on. Use PUT, PLACE or INSERT to put objects into containers or on supporters, e.g. PUT GOLD IN SACK or PLACE SACK ON TABLE.

You will encounter a couple of characters in the game, not necessarily human. When you first meet new characters, in addition to examining them, you should try talking to them, e.g. TALK TO SHEPHERD. To get further information from them, try asking them about something relevant, e.g. ASK SHEPHERD ABOUT ALCHEMIST. You can also try showing them something or giving them something, e.g. GIVE AXE TO SHEPHERD.

You can use IT or THEM to refer to the noun used in the previous command, e.g. EXAMINE NOTE, READ IT, EXAMINE PEBBLES, PUT THEM IN BAG.

You can refer to multiple objects by separating the objects with AND, e.g. GET AXE AND NOTE. Using IT and THEM in the next command will only refer to the last of those objects, e.g. EXAMINE IT will refer to the note.

When using ALL, you can use EXCEPT or BUT to exclude some objects, e.g. DROP ALL EXCEPT BOTTLE.

You are awarded points for discovering important items and achieving tasks. The maximum score is 100. The score and the number of moves is shown in the status bar at the top of the screen. You can also use SCORE to see how you're going or FULLSCORE to see what tasks you have completed.

Use VERSION to get the game version. Use ABOUT or INFO to get background information and credits for the game. Use CREDITS to get the credits only.

During the game, you will find a map that is drawn using ASCII letters and symbols. You can turn the map off using MAP OFF and it will be replaced by a verbose description. You can turn it back on again using MAP ON.

Use UNDO to undo the last move. This is handy if you change your mind, make a mistake, get killed or get into an unwinnable situation.

Use HELP to get a brief reminder of how to play the game or HINT to get a context-sensitive hint related to the current location.

Use RESTART to restart the game from the beginning. Use QUIT (or Q) to quit without restarting.

Most importantly, have fun, enjoy the game and try to steal the alchemist's gold without getting caught.

There are two ways to play the game.

Android: I recommend Fabularium from Google Play. (There may be others, as well.) Hunky Punk is not suitable, as it does not display monospaced fonts correctly.

iOS: I recommend Frotz from the Apple App Store. (There may be others, as well.)

Windows: I recommend Windows Frotz from the infocom/interpreters link above. (There are others, as well.) 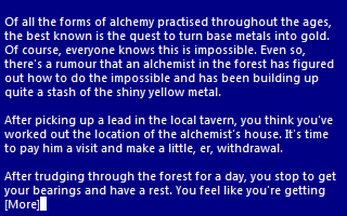 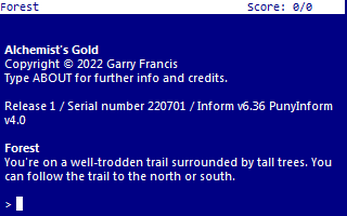 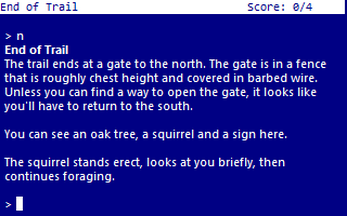