You were driving home from the Second National Conference on Acid Rain when you started getting tired. As it was late at night and you were in the middle of nowhere, you pulled over to the side of the road for a bit of shut-eye.

When you wake up, you find that it's dark and dismal outside and raining heavily. You'd better get a move on and get the car under cover. Despite all the protective coating you've applied, acid rain can still make a mess of your duco.

Your goal is to start the car and drive home. You will soon find that this is not as easy as it sounds. As the story develops, you will find that there are multiple sub-goals. I can't tell you what they are, as that would spoil the fun.

This is a traditional text adventure that was written for ParserComp 2021.

In some cases, the verb phrase and first noun phrase may be followed by a second noun phrase. The two noun phrases are usually separated by a preposition. For example, UNLOCK GATE WITH IRON KEY. If you only use a verb and a noun, the game will generally tell you if it needs an extra phrase or implicitly try to deduce what is needed for the second phrase.

To move around, use commands like GO NORTH and WALK SOUTH. You can move in any of the four cardinal compass directions, as well as UP and DOWN. (There are no diagonal directions in this game.) To save typing, movement commands can be abbreviated to N, S, E, W, U and D. You can sometimes use other movement commands such as CLIMB, ENTER, EXIT, GET ON, GET OFF and JUMP. Most of these are alternatives to normal compass directions. There is only one exception and this will be reasonably obvious when the time comes.

Whatever you do, make sure you draw a map as you go. This is a medium-sized game. If you don't draw a map, you will most certainly get lost or miss exits to other locations.

Make sure you EXAMINE everything you find, as subtle hints and clues are scattered everywhere. It might even reveal a new object. When you enter a new location, scan the location description for nouns and examine each of those nouns. If the responses reveal any new nouns, then examine those as well. To save typing, EXAMINE can be abbreviated to X. For example, EXAMINE CAR can be abbreviated to X CAR.

You can also try your other senses when it seems appropriate, e.g. SMELL, TOUCH and LISTEN. Unlike EXAMINE, these actions probably aren't necessary to solve any puzzles, so don't feel obligated to use them.

There are many other verbs that can be used to manipulate objects. These will be fairly obvious when the time comes. Common verbs include OPEN, CLOSE, LOCK, UNLOCK, TURN ON, TURN OFF, EAT, DRINK, PUSH, PULL and so on. Use verbs like INSERT or PUT to put objects in containers or on supporters, e.g. INSERT CAR KEY IN IGNITION or PUT BOOK ON TABLE.

To see what you're currently carrying and wearing, use INVENTORY (or I). As you are not a pack horse, you can only carry eight objects at a time, not counting the things you are wearing. As a consequence, inventory management is an important aspect of the game. Most objects only have one use, so drop them when you're finished with them. Otherwise, drop them in a central location and come back for them later.

You will encounter quite a few creatures in the game. When you first meet a new creature, in addition to examining it, you should try talking to it, e.g. TALK TO MACAW. It won't necessarily answer you, but it never hurts to try. If it does appear to communicate, try asking it about something relevant to get further information, e.g. ASK MACAW ABOUT SCREWDRIVER. You can also try showing it something or giving it something, e.g. GIVE BONE TO DOG.

You can use the pronouns IT, HIM, HER or THEM to refer to objects used in previous commands, e.g. EXAMINE NOTE, READ IT.

You can refer to multiple objects by separating the objects with AND, e.g. GET APPLE AND ORANGE.

There is no score in this game. The number of moves is shown in the status bar at the top of the screen.

Use VERSION to get the game version. Use ABOUT or INFO to get some background information and credits for the game. Use CREDITS to get the credits only.

Use UNDO to undo the last move. This is handy if you change your mind, make a mistake or get killed. (You can get killed, but the game shouldn't allow you to get into an unwinnable situation.)

For an extra challenge

This game is all about exploration, finding things, managing your resources, solving puzzles and having a bit of a laugh along the way. For an extra challenge, once you have completed the game, try solving it in the minimum number of moves. You should be able to do it without replacing the batteries in your light source.

Most importantly, have fun, enjoy the game and keep out of the rain.

Windows: I recommend Windows Frotz from the interpreters link above. (There are others, as well.)

Type ABOUT in game for further background info. 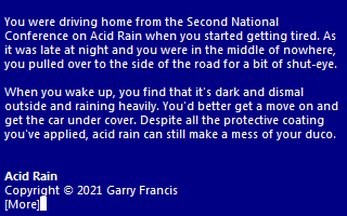 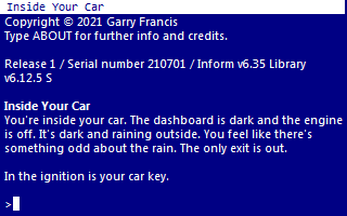