It's been a really tough year for many people with bush fires, floods and other natural disasters and then the Covid-19 pandemic. Many people are doing it tough, so it's up to Santa Claus to bring a smile to their faces and make sure that all the nice children get a present on Christmas Day, even if their parents can't afford it.

Today also happens to be your birthday. You have just turned 16, which is the elvish coming-of-age. It's a very proud day when Santa's elves start their traineeship.

You've been told to report to Santa in the lounge room to receive your instructions for your first day on the job. Good luck, young Eldrid.

Early in the game, Santa will give you a list with 10 chores to do. Each chore that's completed will earn you 10 points. The majority of the chores are to get Christmas presents for the children on the list. In order to get the presents, you first have to find out whether the children have been naughty or nice, what they want for Christmas and what materials you need to make the presents. As a consequence, the beginning of the game is an information gathering exercise. Don't worry, it's very easy.

Unfortunately, materials for the presents are in short supply due to the Covid-19 pandemic, so you may have to scrounge around to find what you need. Some of the materials are easily acquired from supplies or toy storage, but others will take a bit more ingenuity. You earn 5 points for each present that you find or make and a further 5 points for putting it on Santa's sleigh. Each time you are awarded points, a short jingle plays, so make sure you have sound turned on.

Incidentally, the list that Santa gives you is sprinkled with elvish magic. It not only provides you with a dynamically changing reminder of what you have to do, but also provides you with a colour-coded indication of your progress, so you'll probably want to keep it with you.

This is a traditional text adventure written for the Adventuron Christmas Jam, 17 November to 23 December 2020. See the jam page for the jam rules.

In some cases, the verb phrase and first noun phrase may be followed by a second noun phrase. The two noun phrases are usually separated by a preposition. For example, DIG SNOW will attempt to dig a hole in the snow with your hands (as you didn't specify a second noun phrase), but DIG SNOW WITH SPADE will attempt to dig a hole with the spade. If you only use a verb and a noun, the game will generally tell you if it needs an extra phrase or implicitly try to deduce what is needed for the second phrase.

To move around, use commands like GO NORTH and GO SOUTH. You can move in any of the four cardinal compass directions, as well as UP and DOWN. To save typing, movement commands can be abbreviated to N, S, E, W, U and D. You can sometimes use other commands such as CLIMB, ENTER, GET ON or JUMP ONTO. These will be reasonably obvious when the time comes.

The game includes a number of containers (like boxes) and supporters (like tables). If you examine these, they will either reveal their contents or tell you that they're empty.

You can also try your other senses when it seems appropriate, e.g. SMELL TREE, TOUCH FIRE or LISTEN. Unlike EXAMINE, these actions aren't necessary to solve any puzzles, so don't feel obligated to use them.

To see what you are currently carrying and wearing, use INVENTORY (or I). As you are only a young elf, you can only carry ten items and wear two items at a time, but you can always put things in containers if you need to increase your load.

There are many other verbs that can be used to manipulate objects. These will be fairly obvious when the time comes. Common verbs include OPEN, CLOSE, LIGHT, EXTINGUISH, EAT and so on. Use PUT, PLACE or INSERT to put objects into containers or on supporters, e.g. PUT TURKEY IN CAGE or PUT BREAD ON TABLE.

When you are ready to make a toy, just take all the parts to the assembly area and ASSEMBLE, BUILD, CONSTRUCT or MAKE the relevant toy.

Part of the challenge is working out what verbs to use in any given situation. Don't be scared to try anything. The game has well over 100 verbs, so if something doesn't work, try a synonym or try a different way of achieving the same thing. For example, if FEED RUDOLPH doesn't work, try GIVE CARROT TO RUDOLPH.

You will encounter quite a few characters in the game, not necessarily human. When you first meet new characters, in addition to examining them, you should also try talking to them, e.g. TALK TO SCROOGE. To get further information from them, try asking them about something, e.g. ASK SCROOGE ABOUT CRATCHIT or just ASK ABOUT CRATCHIT. You can also try giving them something or getting something from them, e.g. GIVE PRESENT TO SCROOGE (or GIVE SCROOGE PRESENT) and ASK SCROOGE FOR MONEY (or ASK FOR MONEY).

You can use IT or THEM to refer to the noun used in the previous command, e.g. EXAMINE BOOK, GET IT, EXAMINE MARBLES, GET THEM.

Use TURNS to see how many turns you've taken. Once you've solved the game, you should try to solve it in as few moves as possible. The number of turns taken does not include 'meta' commands such as TURNS and LOOK.

Use UNDO to undo the last move. This is handy if you change your mind, make a mistake or just want to experiment. The game should not allow you to get into an unwinnable situation.

Use TSTART to start a transcript and TSTOP to stop it. You will be prompted for a file name when you stop the transcript.

Most importantly, have fun, enjoy the game and have a happy Christmas!

Germania One font by John Vargas Beltrán, licensed under the Open Font License.

Title screen adapted from an image by paci77.

The game was prototyped in Inform 6, then ported to Adventuron. Adventuron was written by Chris Ainsley. 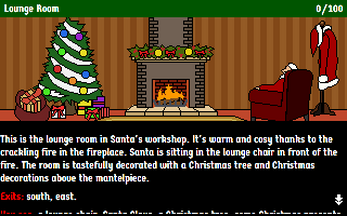 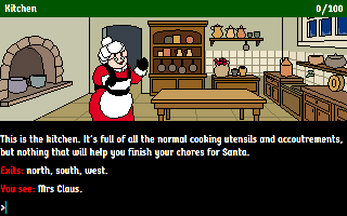 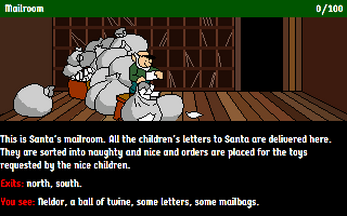 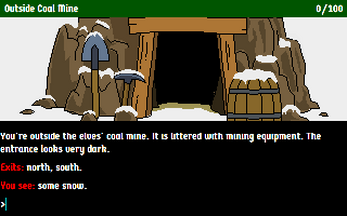